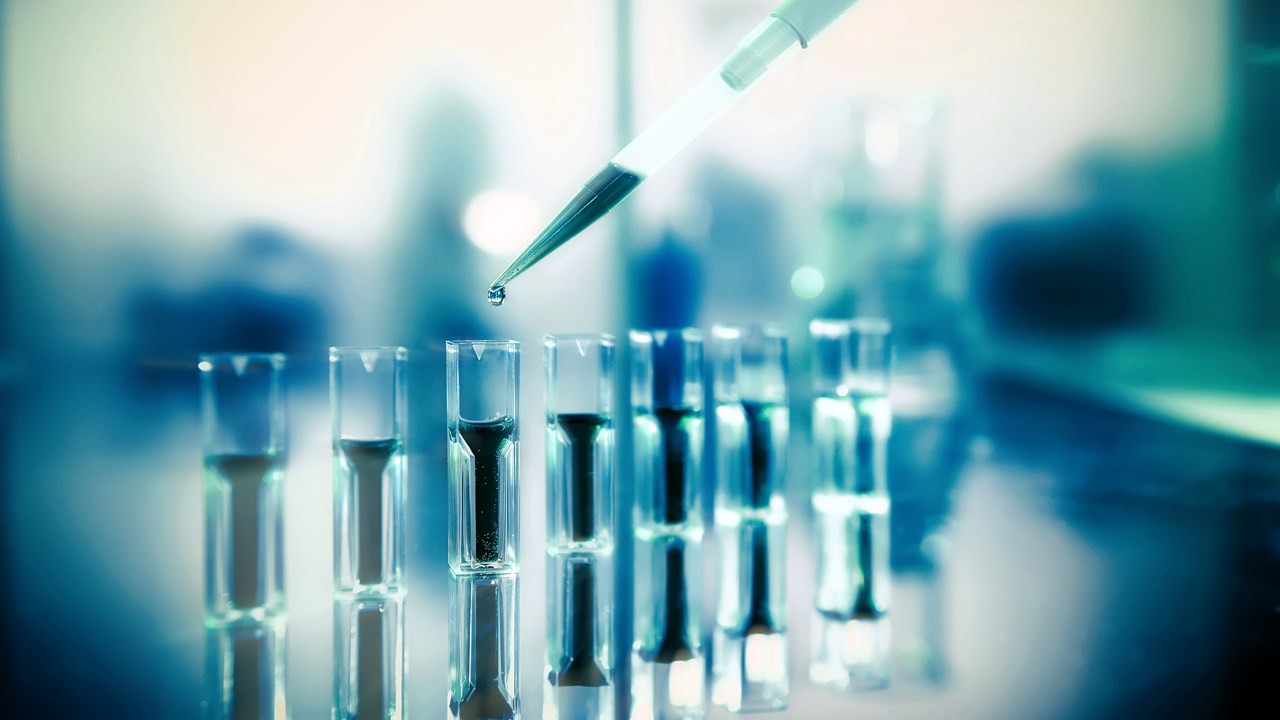 In this post, we examine how spectroscopy can characterize hemoglobin, myoglobin and cytochrome, which are key proteins in mammal physiology. The study of these proteins has implications for biomedical applications.

What Are Heme Proteins?

Heme groups bind to proteins and are critical for proteins to carry out their biological functions. Heme proteins have an iron atom at the center of a porphyrin prosthetic group, making them an extremely versatile example of a larger class of metalloproteins, a term used to describe any protein with a metal ion cofactor.

Hemoglobin and myoglobin are two common examples of metalloproteins. They are similar compounds that function to store and transport oxygen in mammalian cells. Another example of a metalloprotein is cytochrome c, which plays a critical role in the electron transport chain to aid in ATP synthesis.

Heme proteins play a vital role in mammal physiology. They store and transport oxygen in the bloodstream and transport electrons in the mitochondria to synthesize high-energy molecules used to drive cellular processes.

Heme groups generate absorbance bands, which vary based on the state of the heme group. Absorbance measurements can be used to study critical protein parameters, particularly protein conformation (structure), and to provide information on the binding and oxidation state of the heme prosthetic group.

Heme proteins may carry up to four oxygen molecules, with the conformation of the protein being different depending on the presence of the oxygen molecule, and the number of bound oxygen molecules. As such, spectroscopy is a useful tool for measuring blood oxygen levels. This is important in a variety of medical applications, including situations where patients are sedated, comatose or otherwise unable to express nausea or faintness, which are common signs of low blood oxygenation.

The Ocean Insight Lab Services team used UV-Vis spectroscopy to explore the characterization of hemoglobin, myoglobin and cytochrome, which are important for their functions in mammalian physiology. Like many biomolecules, these metalloproteins have unique spectra that can be measured using absorption spectroscopy in the ultraviolet or visible ranges.

The original setup for this experiment used a Spark spectral sensor, which has since been retired. The Ocean HDX and Flame spectrometers are current options for these experiments that provide significant advantages in performance, flexibility and stability.

To measure the visible absorbance spectra for hemoglobin (Sigma H-7379), myoglobin (Sigma M-0630), and cytochrome c (Sigma C-3131), solutions of each were prepared in water at a concentration of approximately 1 mg/mL. The samples were diluted as necessary to provide spectra data below 1 AU, then pipetted into disposable cuvettes. Absorbance measurements were taken with integration time set at 3.5 ms, 50 scans to average, and boxcar smoothing width of 10.

The absorbance spectra for the measured metalloproteins revealed similarities in the spectral features for each protein resulting from the presence of the heme group (Figure 1). 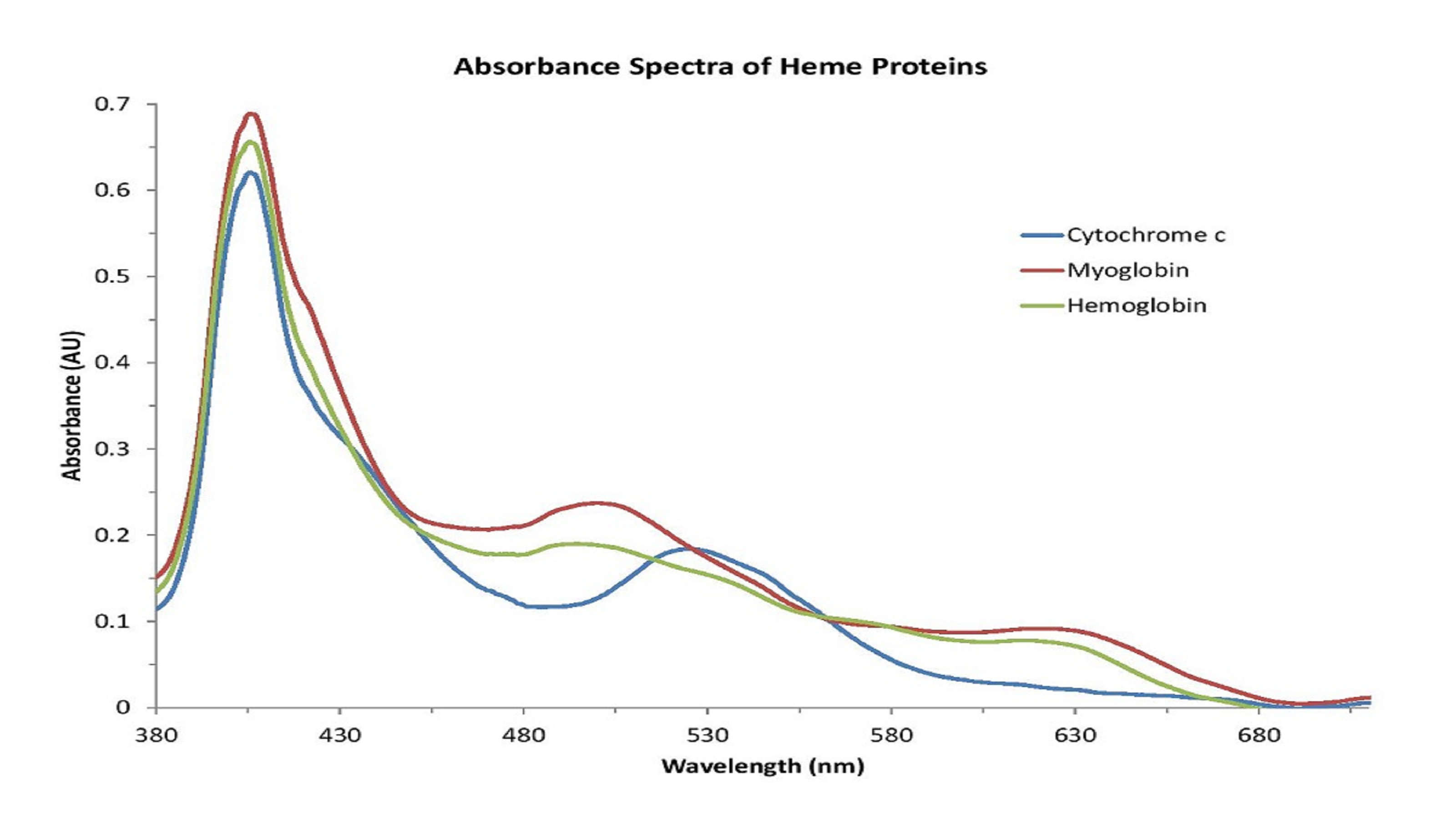 Based on the shape of these spectra, which change with the state of the heme group, we can conclude that the iron atom in the heme groups of each protein has been oxidized. Therefore, the spectra are consistent with those of methemoglobin (Figure 2), metmyoglobin (Figure 3), and oxidized cytochrome c (Figure 4). 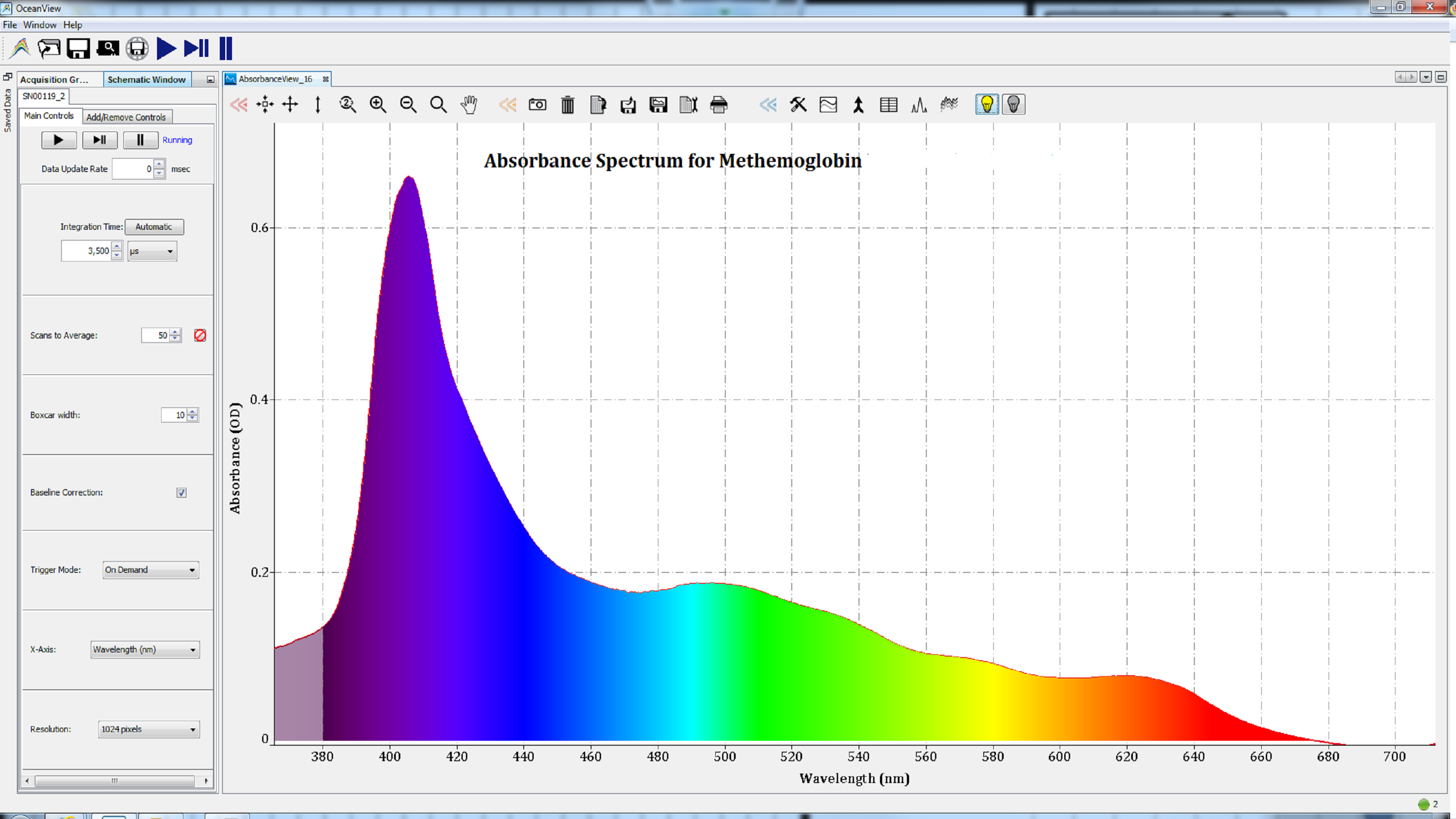 Figures 2: Oxidation of the iron atom in the heme group of metalloproteins resulted in spectra consistent with methemoglobin. 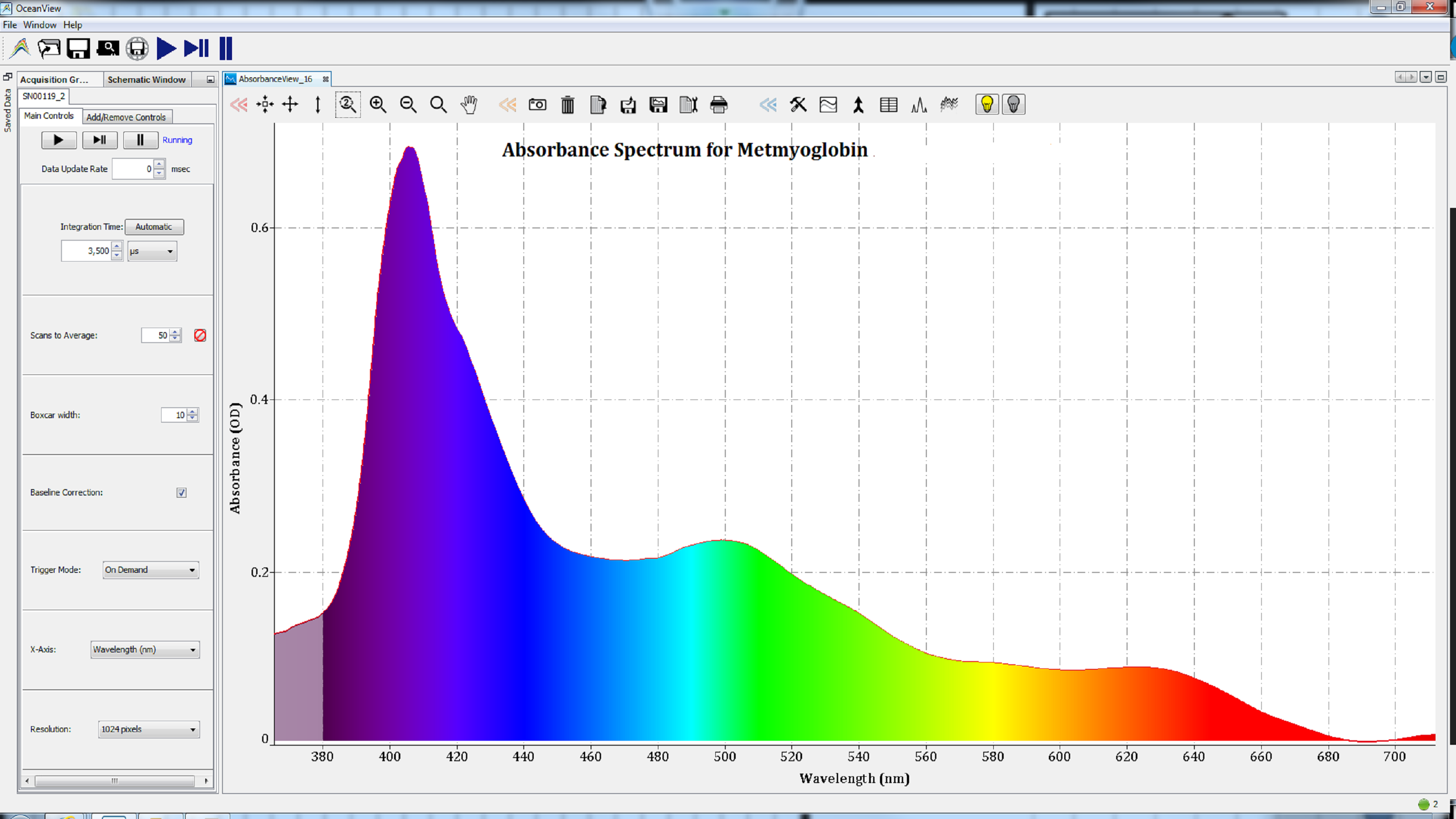 Figures 3: Oxidation of the iron atom in the heme group of metalloproteins resulted in spectra consistent with metmyoglobin. 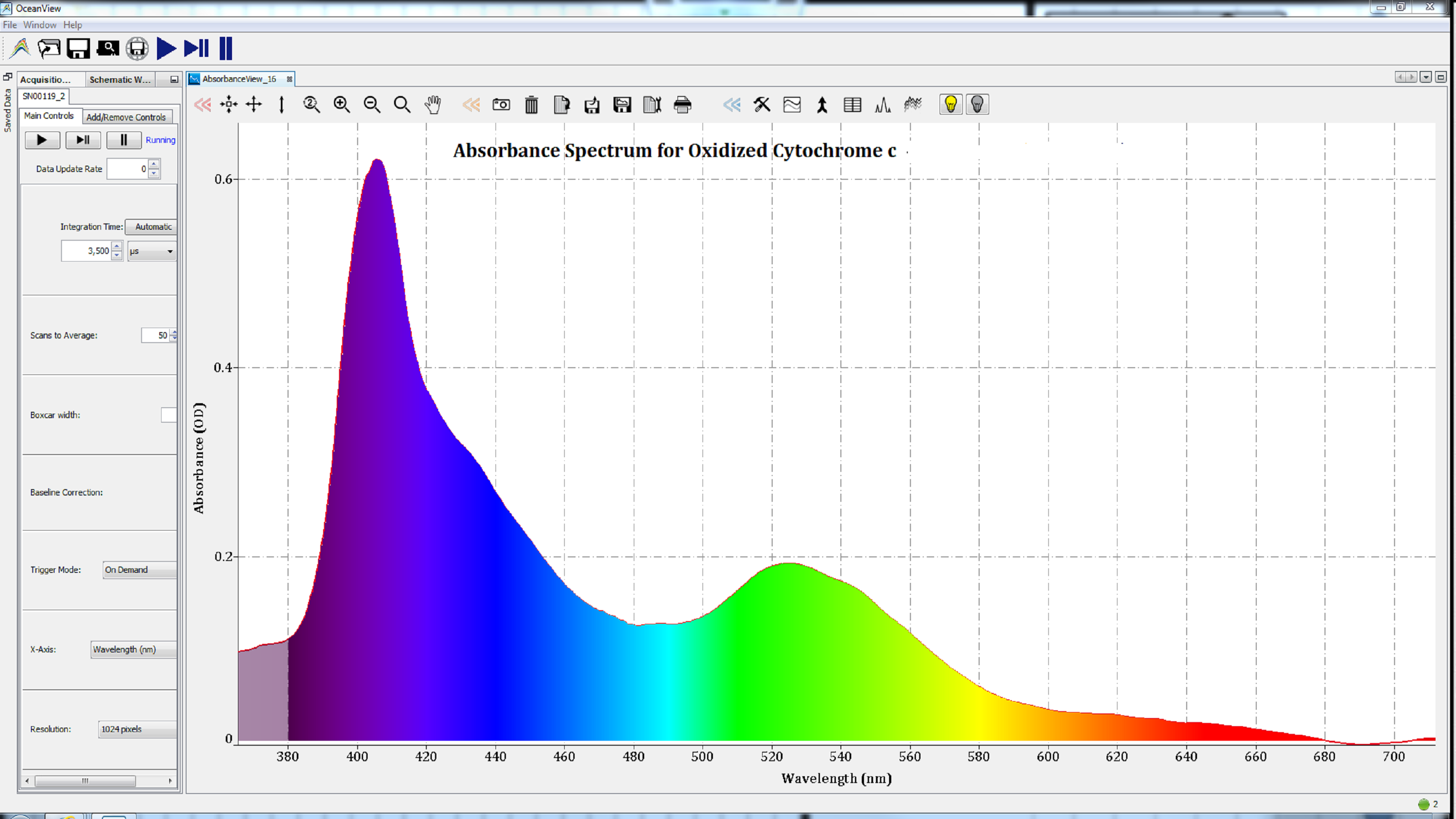 Figure 4: The absorbance spectrum of cytochrome c after oxidation.

The spectra measured for these proteins would be very different if the iron atom was in a different oxidation state or had another gas bound to it.

Absorbance spectroscopy, particularly in the UV-Vis range, is a powerful tool to characterize proteins and other life science samples, as indicated here by the ability to study the state of the heme group. In the case of metalloproteins, the UV-Vis absorbance spectra provide detailed information about the heme prosthetic group. As heme groups are vital to proteins carrying out their critical biological functions, this technique is useful in education, research, clinical laboratory, and medical care settings.