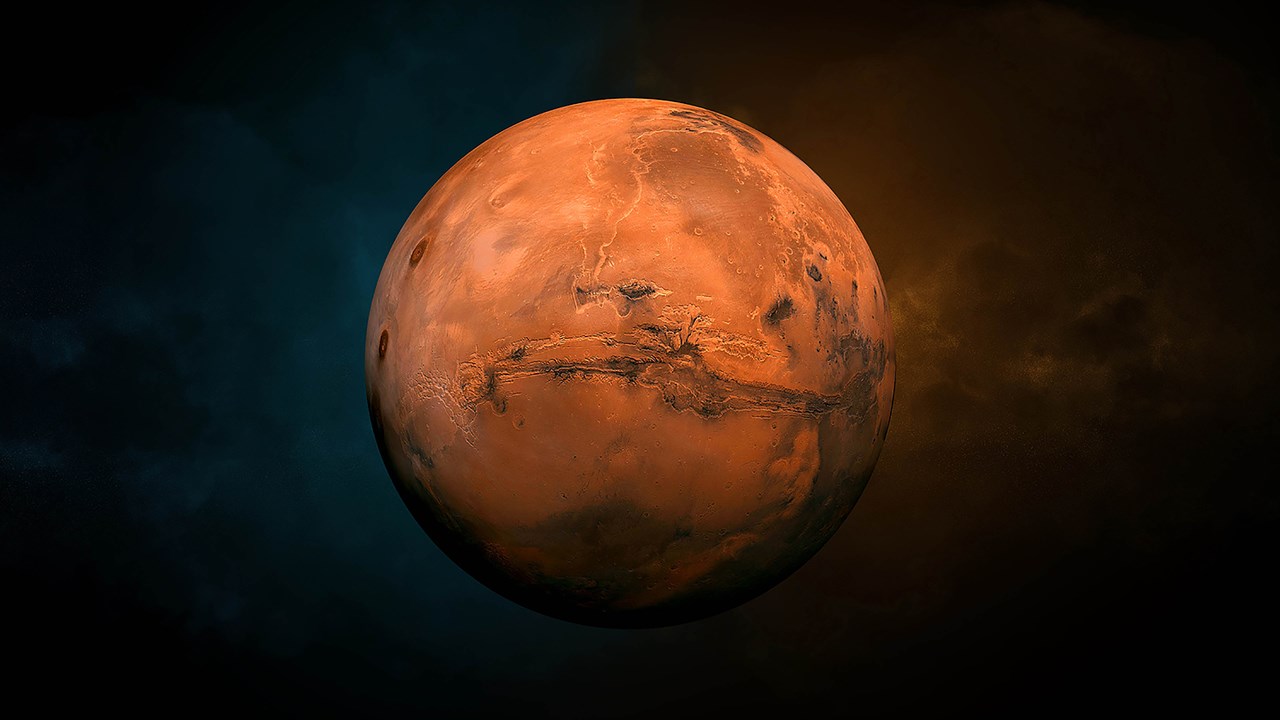 As space exploration reaches the next phase of its evolution, modular spectrometers provide engineers and researchers with valuable tools in analyzing materials and methods propelling spacecraft across the universe.

Charles Brown, a Marketing Strategy Analyst for Ocean Insight, is the author of this article and a member of the Halma Future Leaders Development Programme. Ocean Insight is a Halma company.

In the more than half a century since mankind took its first steps on the Moon, human space exploration has mainly centered on unmanned exploration vessels and low-Earth orbit missions. However, in recent years there has been a revival of hope for the space industry, a hope that we can achieve the ambitions of the early space explorers of the 20th century.

This revival has arisen as the result of lower launch costs, improved technology, an increase in private investments, and growing public sector interest. The global space economy is predicted to triple in size in the next 20 years, surpassing $1 trillion in value by 20401. The results of this newfound space renaissance are evident in a steady increase in the number of satellites being launched globally year on year since 20052. Additionally, NASA and other private space companies have scheduled projects for manned missions to both the Moon and Mars, with NASA recently revealing plans to have a sustained lunar presence by 2028.

Spectroscopy plays an important role in space flight. A spectrometer can be found on almost every modern spacecraft. Satellites, space stations and even Mars planetary rovers use spectrometers in some way, as the measurement of light can be highly valuable in further understanding our universe. Modular spectroscopy makes this research technique possible, due to the minimal size, weight and power that modern spectrometers offer for most space flight system.

The growing space economy will provide greater opportunities for technologies including spectroscopy, whether for terrestrial, lab-based testing or onboard spacecraft measurements. However, even the most robust commercially available off-the-shelf spectrometers cannot withstand the harsh conditions of a space environment. Instrument modifications are required to meet extreme operational demands, yet still perform to a high standard. Ocean Insight has a great deal of experience in working through such issues.

Here are some of the potential considerations:

Reducing the size and weight of onboard instrumentation is of great consideration in the development of spacecraft. Using a compact, lightweight spectrometer like the Ocean Insight STS microspectrometer for onboard analysis can be particularly beneficial. The STS is versatile yet weighs just 60 g, which is significant in limiting payload burdens (Figure 1). In addition to meeting the needs to reduce size and mass, simpler interfaces like STS require less complicated circuitry, thus increasing the reliability of the complete system. 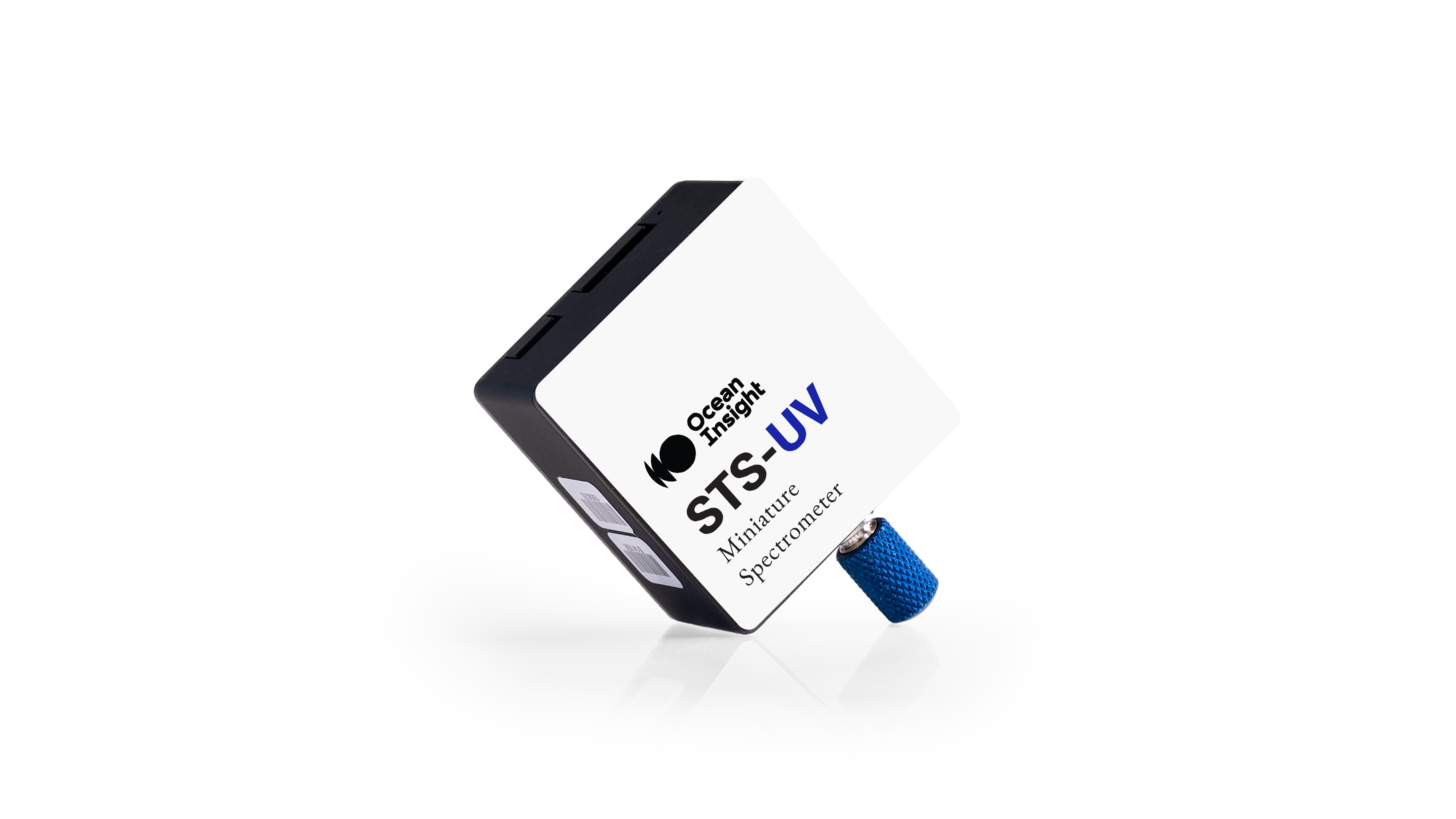 LCROSS: A Trip to the Moon

Ocean Insight played a role in NASA’s Lunar Crater and Observation Sensing Satellite (LCROSS) mission, a 2009 project that attempted to confirm the presence or absence of ice water on the lunar surface. A modified version of one of our QE series spectrometers, configured to detect light in the UV-Visible region, was onboard the LCROSS. This spectrometer would confirm the presence of water by identifying molecules of ionized water, hydroxyl radicals, or carbon containing organics.

Measurements were taken as the craft approached the surface, with a debris plume being created by the impact of the upper rocket stage. Spectroscopic measurements were made from sunlight passing through the plume and could identify any molecules in the plume that would indicate the presence of water. NASA confirmed water signatures were detected in both the infrared and UV measurements taken during the LCROSS mission, with Ocean Insight’s onboard QE spectrometer providing the UV confirmation. Detection of water on the lunar surface is highly significant as it is a marker for potential life. Furthermore, water is crucial if a lunar base is to be established as it can sustain life and be a source of fuel in the form of hydrogen. (Early in 2022, Chinese space researchers reported in situ analysis of water on the Moon.)

NASA’s Curiosity rover has been roaming the surface of Mars for nearly a decade now. It has been a major success and vastly improved our knowledge of both the climate and geology of the surface of the Red Planet. Ocean Insight worked with NASA in the early development of the space agency’s Chemistry and Camera Complex (ChemCam), a device on the rover that uses Laser Induced Breakdown Spectroscopy (LIBS) to assess the elemental composition of rock and soil found on the surface. LIBS works by targeting an area of rock up to 7 meters away and vaporizing it with a high energy infrared laser. The spectrum of this vaporized rock is then observed using a spectrometer and an elemental composition can be established.

Three models of Ocean Insight HR series spectrometers were evaluated in early versions of ChemCam, configured to detect separate wavelengths, as some detectable elements have spectral lines in multiple spectral ranges. Ultimately, however, NASA opted for its own, highly customized spectrometer for the ChemCam mission, although some of our mechanical designs were part of the instrumentation that made it to the planet’s surface.

ChemCam has been valuable in successfully identifying trace elements and metal oxides. One of Curiosity’s more ground-breaking discoveries was when ChemCam observed >25 wt% MnO (manganese oxide) in parts of rock found in the Gale crater. This suggests that the ancient Mars atmosphere was once much more abundant in oxygen than it is today, and that groundwater may once have been prevalent.

Ocean Insight STS spectrometers were used in early testing for the NASA Orion spacecraft. The Orion hopes to serve as the vessel to carry humans farther than they have ever travelled before, with a design to support future manned missions to Mars.

Re-entry into the Earth’s atmosphere is a critical consideration with the design of any manned spacecraft. This is due to the extremely high temperatures reached from atmospheric friction as a craft travels at high speeds out of the vacuum of space into our atmosphere. A heat shield is used as a form of protective insulation to keep the astronauts safe inside of the craft (Figure 2). 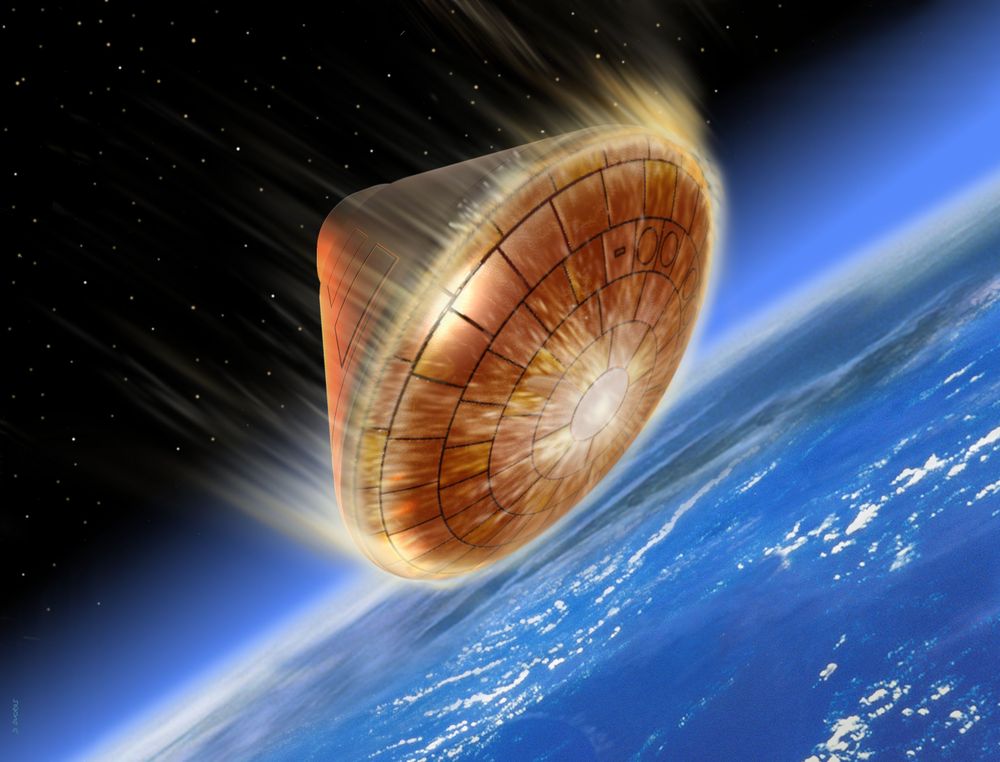 Figure 2. This rendering imagines the heat shield protecting the Orion spacecraft during re-entry. Careful analysis of shield materials is an important element of mission success.

Gases surrounding the heat shield during re-entry can reach temperatures of up to 4000 oF, with thermal radiation producing a significant amount of energy that goes into the vehicle. Spectral measurements taken onboard using the Ocean Insight STS spectrometer will allow NASA to refine and validate its radiation heating models (Figure 3). This will enable optimization of the design of Thermal Protection Systems (TPS) for high-speed Earth atmosphere re-entry. 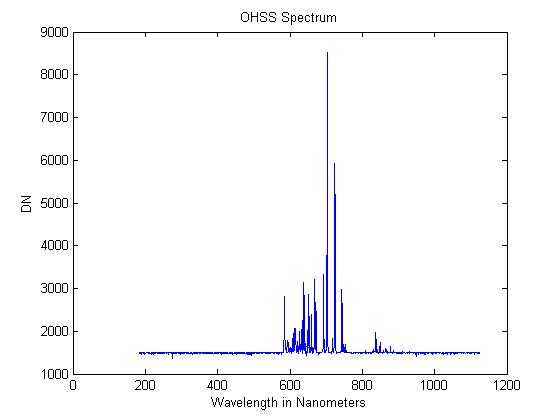 Figure 3. As Orion returns to Earth, onboard spectrometers will gather spectral data from the heat shield during re-entry. In early testing, engineers combined the spectral output for UV and NIR spectrometers to measure neon light.

A growing area of interest in the space industry involves CubeSats. CubeSats are a type of miniature satellite used for space research and consist of multiple cubic modules. They are extremely versatile due to their small size and weight and are much less costly to develop than traditional satellites. The number of CubeSats currently in orbit around the Earth has increased 40x in the last decade.

Ocean Insight has collaborated with private companies and universities in the development of CubeSats that have been used to carry out valuable scientific research. The Technical University of Berlin is developing a CubeSat for the detection and characterization of meteoroids using UV spectrometry. Ocean Insight Maya2000 Pro and USB spectrometers are under consideration for TU Berlin’s CubeSat to carry out UV measurements. Our spectrometers are well suited for the application due to their reliable performance, small mass, and low power consumption. This research is advantageous as measurements like this cannot be performed on Earth due to atmospheric absorption of light <310 nm.

Ocean Insight also has successfully collaborated with the Human Spaceflight Department at OHB Systems and the European Space Agency (ESA) to develop a type of CubeSat. In 2019, OHB successfully deployed a customized Flame model spectrometer as part of their SPECTRODemo project. SPECTRODemo is the precursor to the proposed Exobiology Facility onboard the International Space Station (ISS). The Exobiology Facility is an external CubeSat facility on the ISS used to investigate the chemical consequences of exposure to solar radiation (Figure 4) on biological and non-biological samples. 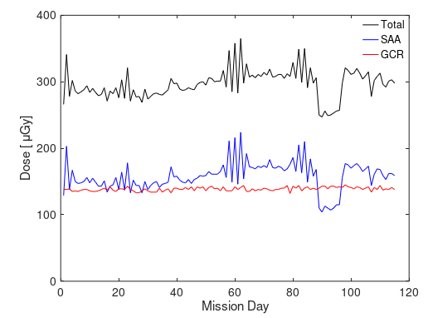 Figure 4. This graph demonstrates the intense cosmic radiation to which the ISS is exposed during the mission. The y-axis is in microgray (µGy) units, a measure of absorbed radiation. For context, humans can withstand about 3 µGy. The graphs correlate to Galactic Cosmic Rays (GCR) and the South Atlantic Anomaly (SAA), a region where the Earth’s radiation belt is closest to the planet’s surface.

Using our Flame UV-Vis spectrometer, ISS researchers can monitor changes in the absorption spectrum of these samples to understand any changes in chemical composition. Experiments like this address the difficult challenge in attempting to mimic early Earth or space conditions in ground-based laboratories.

Modular spectroscopy is frequently chosen for space applications as it provides extremely useful measurements, whilst adding minimal size and weight to spacecraft payloads. Ocean Insight spectrometers have continued to evolve as the space industry has progressed, in part because we are willing to embrace new challenges and adapt our technology to meet them. This has led to a generation of instrumentation that is more accurate, robust, and easier to integrate into applications that explore space and other exciting frontiers.